Many dentists are skeptical about lasers in the age of Physics-denying “dental laser CDE”, and “dental lasers”, that are implant-melting-capable, or bright-plasma-flash-blinding, or charred-ink-on-the-glass-tip-burning, and so on. The change, however, is coming, one step and one “dental laser” at a time. The Renaissance of laser education in dentistry is driven by Physics.

The review by the ALSC member Robert Levine, DDS, just published in Inside Dentistry, recognizes the hot glass charred tip nature of cutting dental diodes – “The State of the Art of Lasers”.

“For the diode lasers, their varying wavelengths will result in different levels of water absorption. These lasers have a very poor coefficient of absorption of color … Cutting with a diode laser requires activating the tip … In essence, they function as … electro-surgery units” – Robert Levine, DDS

It is in sync with the earlier assessment by the Honorary ALSC member Gordon Christensen, DDS, in his interview by Howard Farran, DDS, of DentalTown (see video clip below).

“At diode wavelengths around 1,000 nm, light scattering dominates the very weak absorption. When diode lasers are used, they do not cut optically. Instead, the glass tip of the diode fiber is charred and heats up to between 500°C to 900°C via heating of the char by the diode laser light. The hot charred/activated glass tip burns the soft tissue on contact. Dental diodes do not cut the tissue with photons, but with hot charred glass! The device that is closest to a diode that cuts on the same thermomechanical principle is electrocautery. Therefore, diodes are thermal contact ablation devices and not laser wavelength-dependent precise cutting instruments.” – Richard Winter, DDS

a) User’s technique and skill in controlling the effectiveness of the tip’s “initiation” (or “activation”), i.e., creating a light-absorbing char layer on the tip end;

b) Monitoring the degradation of the glass tip’s char surface which will increase the effective photo power output from the “partially transmitting” tip; the degraded char surface reduces tip temperature and leads to less ablation, an increased risk of near-IR-induced subsurface thermal-induced tissue necrosis, and mechanical tearing of the tissue by the cooler glass tip’s edges;

d) Staying within the thermomechanical thresholds for any thermal gradient-induced fractures of the hot glass tip at 500-900°C operating temperatures, while considering the biocompatibility of possible fractured glass fragments;

An eloquent take on cutting diodes by Robert Strauss, DDS, MD, tops our list of laconic summaries of the essence of soft-tissue cutting diodes (see photo below). 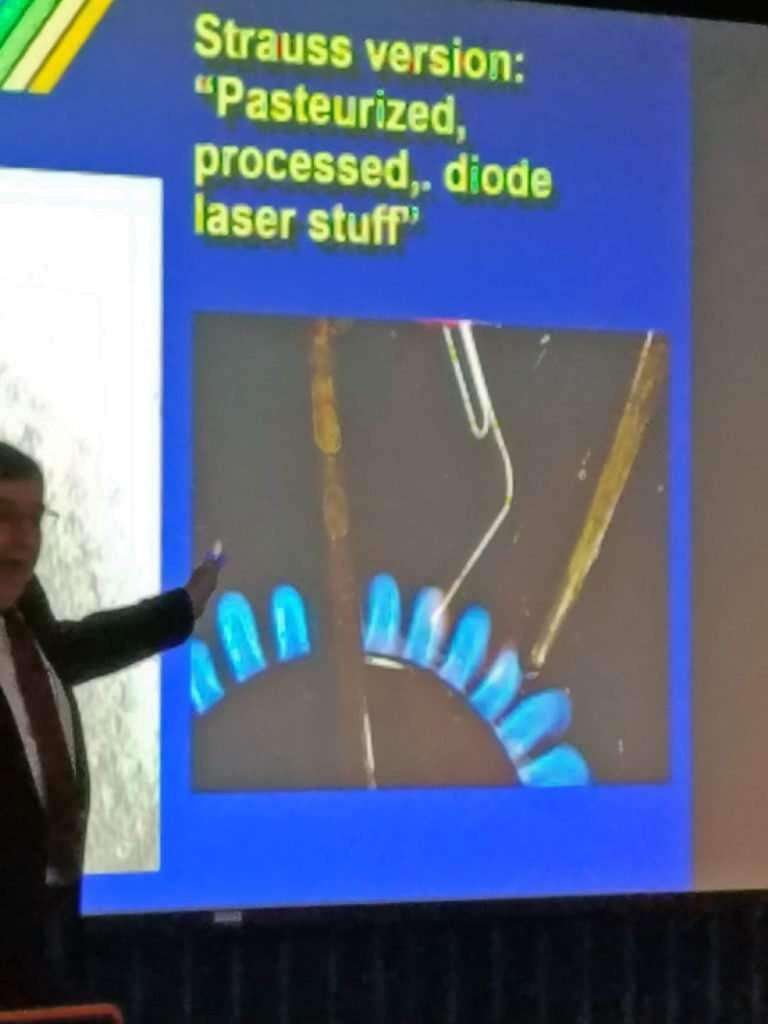 This photo shows the end of a paperclip being heated up on a gas burner; “Strauss version: Pasteurized, processed, diode laser stuff”. This photo is from the presentation “Lasers in Dentistry and Oral & Maxillofacial Surgery” by Robert A. Strauss, DDS, MD, FACS, from November 18, 2017 at Tufts University in Boston, MA.

Great minds do think alike! It feels great to have the reality of 1+1=2 returning to laser dentistry! It is time for CERP ADA and PACE AGD and ADEA to pay attention to the science-based and not opinion-based CDE.