Professor and Director of the Residency Training Program in Oral and Maxillofacial Surgery at the Virginia Commonwealth University Medical Center, Richmond, VA 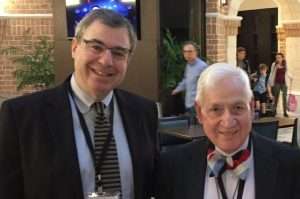 Dr. Strauss with Dr. Patel at the 2018 Symposium

What a life I have had! How lucky am I? Was I supposed to have this much fun? These are the kinds of questions that ran through my mind when I was asked to write an article describing my history of teaching students, residents, and practitioners about lasers. Of course, my initial euphoria was quickly followed by the inevitable philosophical and spiritual conundrum—it has been a very, very long history—where do I begin?

As is the usual answer to that question, it is best to begin at the beginning. So, how and where did I start on my path to laser nirvana? As anyone knows who has taken one of my courses, I am, well, a geek! — a card-carrying, pocket-protector-wearing, taped-together bridge of the nose glasses, nerd. I admit it (and honestly, relish in the thought of all those pretty and popular girls in my Brooklyn high school who laughed and ridiculed me as a nerd and I only wish they could see me now. While I am asking philosophical laser questions today, they are mostly asking “would you like fries with that?” Take that, popular girls). As part of my geek heritage, as a junior in high school back in 1969 I had heard about this new technology that allowed light beams to travel great distances unimpeded. Then, to my surprise, my school, in 1969 remind you, got a small helium-neon (HeNe) laser that was probably not much more powerful than a laser pointer that anyone can buy today at the Dollar Store. Still, we geeks loved it! We played with it daily. And it got me thinking. Why couldn’t I build one of those? How hard could it be? But, getting Helium and Neon might prove tricky so I thought I would go old school and build a replica of the very first laser, circa 1960 (thanks to Dr. Theodore Maiman, who only slightly beat out Dr. Patel) — a ruby crystal laser. The concept was good, it was the execution that faltered, as, alas, I failed miserably. It turned out that getting the requisite optically pure Ruby gemstone was not in the cards on a $3.00 a week high school allowance. Had my parents been a little richer, I would be famous right now!!

My laser fantasy remained just that, a fantasy, until I finished my residencies in anesthesiology and oral and maxillofacial surgery in Chicago in 1984. I joined the faculty at the University of Chicago Medical School and happened to come across two experienced laser users from Northwestern University (and there were very, very laser users few back in those days), the late Dr. Bernie Pecaro, a dual-trained OMS/ENT Surgeon and Dr. Robert Pick (and, as an oral and maxillofacial surgeon, I cringe to admit this), a periodontist! They were giving a course in the surgical uses of this new tool—the CO2 laser (thank you Dr. Patel!!), which at the time was only available in the operating room as they were massive articulating arm machines. I was now able to combine my fascination and scientific curiosity with my surgical training. After that training, I began to use the laser in the operating room as often as I could justify (the fact that a 3mm fibr-ma of the buccal mucosa is not actually a “massive tumor” is not important here) and amassed a large number of cases of all manner of diseases as well as a burgeoning number of slides (you remember those square celluloid things, right?). In 1987 I moved to the Medical College of Virginia (now Virginia Commonwealth University) as a new Assistant Professor of Surgery. Luckily, my new Chairman, a world-renowned TMJ surgeon and editor of the JOMS, Dr. Daniel Laskin (who, at age 94, still to this day comes to work and covers resident clinics!) gave me some sage advice: to advance in academics, pick an area of surgery that few people are doing and become an expert in that area. Needless to say, I chose lasers. So, I dedicated myself to learning, operating, publishing, and teaching about lasers. And the rest, now over 35 years’ worth of laser use, as they say, is history.

Although I enjoy performing and writing scientific articles and equally enjoy writing and publishing textbook chapters (to my surprise, over 80 combined at last count), my real love has always been teaching and lecturing. It is why I chose to go into academics and become an OMFS residency program director. Plus, as I was soon to find out, I am a bit of a ham. An actor. A thespian! Although I am usually introverted in crowds (I hate parties) I found that when put in front of a scientific audience, I thrived and actually enjoyed myself. I started easy; a few rubber chicken dinner study clubs. Soon it was state meetings, then national meetings, then before I knew it, I was lecturing in Europe, Asia, South America, and even in Saudi Arabia (but that experience, for a Jewish kid from Brooklyn, would require an entire article of its own!).

I quickly learned that laser lectures had mostly previously fallen into two categories: dry, boring scientific lectures that delved into deep quantum physics (and induced general anesthesia in the audience faster than Pentothal) or purely clinical “show and tells” that lacked any real scientific basis. That was not my style. As a geek, I was dedicated to teaching physics and marrying that with a sound clinical approach to laser use. As an educator, however, I realized that an 8-hour lecture must keep the audience awake if they are to learn. So, I decided to put my somewhat weird and awkward sense of humor (let’s just say that it is probably lucky that I predated the politically-correct era a tad) to work mixing my, by then, fairly vast laser experience with actual science, to teach laser surgery my way.

As an academician, I firmly believe in evidence-based medicine (EBM). My goal was to use EBM as much as possible. However, due to limited numbers of cases and an unlimited number of variables, sometimes EBM doesn’t fit in with individual clinical case techniques. Most laser users and most laser teachers were using lasers in the same manner as they would with a scalpel or an electrosurgical device. That can only lead to, at best, inconsistent results, and at worst, disastrous results. In cases where EBM was not practical, I decided to use scientific-based medicine (SBM). At least this way I could approach clinical cases with some chance of consistent and, more importantly, predictable results.

Dr. Strauss presenting at the 2018 Symposium

Based on my goal of using SBM, I set out to create true “laser surgeons” rather than “laser technicians”. Too many people were using the laser to simply make cuts in tissue without understanding the ramifications of lateral thermal damage, thermal conduction, coagulation necrosis, and scarring. I was determined that after my courses, the user would understand how to use the physics of lasers to their advantage to get those consistent and predictable results that I had long seen myself. Surgeons, not technicians. I also devised my courses to meet all the requirements for hospital-credentialing in lasers and included laser physics, choosing the right wavelength, clinical laser use, and laser safety.

What I found is that when you explain to people WHY they need to understand some basic physics to use the laser correctly, and you do it with a little humor and in an understandable format, they GET IT! I found that it just came down to a few basic principles: wavelength, power, power density, energy density (fluence!), and thermal relaxation time. All of these are related to the holy trinity of lasers: POWER, TIME, and SPOT SIZE. By explaining these three parameters, and how we can adjust them for different clinical cases (which defies the overly simple, incorrect, and commonly used concept of basically just increasing and decreasing power to control depth of cut) I could create real” laser surgeons”. I developed a laboratory handout that was unique in laser courses. It was not a “let’s just play with the cool laser” lab. It was a time-consuming step by step 2-hour curriculum that began with inanimate objects (eg tongue blade) to understand the basic controls of the laser, then on to clear plastic blocks that the learner could shoot the laser into, allowing for visualization of depth and size of the laser effect as we changed parameters, then finally animal material with specified procedures to accomplish. But, after the lecture and the lab, I was proud to say that those practitioners were real laser surgeons who understood not only the disease process but how to manipulate this great tool to get the best results with the least collateral damage.

As an educator (and as a dad), it is always our goal to have our progeny be even better than we are. When. at the end of my course and lab, participants would come up to me and say that they finally understood the right and wrong ways to use their laser now, I swear I could see that look in their eyes. I get to see it almost every day with my surgical residents. They GOT it! It is a look that would make any lecturer, or dad, happy.

I have been fortunate to have given some permutation of those lectures over 150 times around the world. Mostly to oral and maxillofacial surgeons, but also to general dentists, plastic surgeons ( I do a lot of laser cosmetic facial surgery), otolaryngologists, and dermatologists. It turns out that the basic principles of laser surgery defy specialty. If you understand choosing the right wavelength, and correctly use power, time, and spot size (are you seeing a pattern here??) you can treat any lesion, anywhere in the human body, with any wavelength and get great results.

So back to the beginning. How lucky am I? Was I supposed to have this much fun? Well as the saying goes, find something you love to do and you will never work a day in your life. If that is true, I guess I have been happily unemployed for the last 35 years and look forward to “not working” for a few more years! 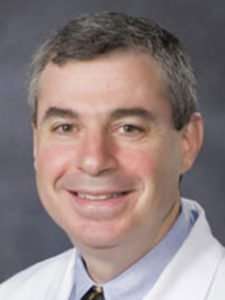 Dr. Strauss received his dental degree from the University of Buffalo and his medical degree from the UHSA School of Medicine. He completed his internship at the Buffalo General Hospital and residencies in both Oral and Maxillofacial Surgery and in Anesthesiology at the Michael Reese Medical Center in Chicago.