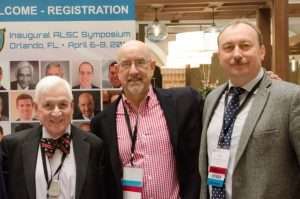 Dr. Patel with Dr. Kaplan and Dr. Vitruk at the 2018 Symposium

I am extremely honored and humbled to be the recipient of the 2020 Kumar Patel Prize for contribution to pediatric dental laser surgery education.

My interest in higher technology dentistry actually began in 1972 as a first-year dental student in Boston, Massachusetts, at Tufts University School of Dental Medicine (“Tufts”). After my graduation in 1975, I was fortunate to be accepted into a new pediatric dental program as the first pediatric dental resident at Montefiore Hospital and Medical Center in the Bronx, New York. There I received intense training in advanced oral surgery for pediatric dentistry with one-on-one oral surgical supervision for performing surgical exposures of unerupted teeth, biopsies and labial, and tongue frenectomy. In 1975, tongue surgery was only performed for extreme speech and swallowing problems. At no time was there any consideration of treating infants or toddlers other than for early childhood caries either with the use of oral conscious sedation or general anesthesia. There was no consideration or discussion of sleep apnea or sleep-disordered breathing, even for adults, in the Oral Surgery Department. In fact, sleep and airway issues were not in the scope of medicine until the late 1970s and early 1980s.

In the mid-1990s the air abrasion arrived as a new high technology that was marketed as being able to remove incipient carious lesions without a drill and without any anesthesia. The procedure was based on the use of aluminum oxide powder propelled through an air-driven handpiece to remove dental enamel and dentin. The tooth could then be restored with the newer flowable composites. The air abrasion technique required a paradigm shift in treatment because of the tactile-free technique required to perform this hard tissue procedure. This new technique forced me to adopt dental magnification loops so that I could observe the caries removal instead of feeling the resistance on my fingers through the dental drill. This procedure of the 1990s became my baseline training for my future optic laser ablation technique of the 2000s.

Then came that faithful day in 2003 when I came across an advertisement for a dental laser to treat patients with the promise of being able to perform oral surgery with less bleeding, less post-op pain, and quicker healing. Obviously, I answered the ad and attended my first dental laser class. I never expected that dental lasers would bring the immense satisfaction that I have obtained through mentoring and ultimately lecturing and travel on an education circuit. After performing a few procedures, I knew this technology required more training. As it turned out, Tufts Dental School’s Continuing Education Department had been recently offering Dental Laser training and certification course. I attended a class. I felt both excited and overwhelmed by the presentation of laser physics, absorption charts, chromophores, spot sizes, fluence, etc. of the various – previously unknown to me – erbium, and photobiomodulation wavelength lasers available in dentistry. I completed this class and tested on the same day becoming “certified” (!) in the use of lasers in dentistry in 2003. Mind you, I did not own an erbium laser, nor a photobiomodulation laser that I was now “certified” (!) to use. I subsequently attended multiple laser dentistry meetings and lectures, and in my excitement, I fell prey to the laser gurus. Not surprisingly, I went on to invest in multiple laser purchases. In fact, my total was three diodes, three erbium, and two PBM lasers before I purchased my current CO2 in 2014. 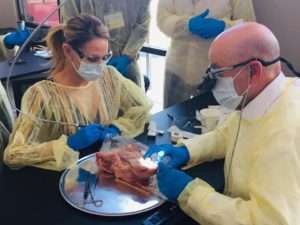 In 2004 I attended several pediatric dental laser lectures. It was there that I realized that the soft tissue laser surgery I performed for gingivectomies, biopsies, surgical exposures and maxillary frenectomies was actually something that many other pediatric dentists around the country did as well. During one of these early lectures, I first heard about treating newborns for tongue- and lip-ties. The lecturer was very convincing as he explained how restrictive oral frenum in infants interferes with breast- and bottle-feeding. Additionally, he began to discuss how infant reflux, failure to thrive and aspirations were a major concern that was in the treatment realm for pediatric dentists. I was convinced that I could safely perform these same procedures, especially as I already had experience treating toddlers and was very familiar with the pediatric airway through my training as a pediatric dentist who administered oral conscious sedation. It was also during this pediatric session that I first heard about another infant supporting organization called the IATP (International Association of Tongue-tie Professionals) where I could potentially further my infant frenectomy training. I joined the IATP and attended their conference in 2009, where during intense two full days of lectures I have acquired improved ways to diagnose infant restrictive frenum. I learned about the specialty of the international board-certified lactation consultant (IBCLC) and how lactation consultants were an important resource for referrals and necessary team members for comprehensive infant care. I also became knowledgeable – for the first time – about infant chiropractic treatment and tummy-time body-work as an asset for my newly growing patient population.

At first, I was not certain how to develop a new educational model for the pediatric laser frenectomy treatment. Fortuitously, in 2011, I was invited to join a People to People Dental Education Program in Beijing, China, with the American Academy of Pediatric Dentistry (AAPD) educators’ volunteer program to spread goodwill and current dental education. As a requirement to attend, each of the ten selected volunteers had to present a 30 minutes dental lecture. Since my new passion was laser infant frenum surgery, I decided to take this opportunity to share my new laser knowledge and surgical technique. After my presentation, one of my fellow attendees, John Liu, DDS, the immediate past president of the AAPD, was so impressed with my presentation, that he encouraged me to speak at the upcoming annual AAPD meeting. I nervously agreed, as I certainly was not comfortable as a public speaker yet. The reception at my AAPD seminar was so encouraging, that I returned to Tufts with the strong conviction that I must develop a university-based education class for infant frenum care.

I was so excited about the even better results that I was having, that I wanted to bring the pediatric frenectomy class to the Tufts Dental School of Medicine Post Graduate Pediatric Dental Department, where I was a volunteer clinical instructor. It took almost four years before our first course there, but it quickly turned to be very successful with attendees from across North America, Europe, Australia, and Asia. As the success grew, we were able to expand the offering into a three-day class with live demonstrations. As my knowledge in breastfeeding, infant birthing and delivery, infant reflux and other medically associated feeding difficulties grew, I became more aware of different presentations of frenum biotype and degrees of restriction on which the diode wavelength did not quite work as easily as promoted by many educators.

My enlightenment came in 2013 when I met Dr. Peter Vitruk at one of the laser dentistry meetings. I asked him a few questions about my confusion with dental diode lasers. He immediately exposed the glaring gap in my knowledge about laser physics and laser-tissue interaction. But, how could he be right and all of the dental laser educators be wrong? Since Peter’s explanation made sense to me, I tried the LightScalpel CO2 laser during wet lab. The CO2 laser did vaporize the soft tissue with a focused beam of light! This was my Eureka moment! The laser had a beam! It was adjustable to tissue biotypes, spot sizes, fluence, power, and energy levels. I realized that the diodes were not true lasers, but rather thermo-mechanical hot glass tip cautery devices, in a surgical application. Peter then offered to let me try his CO2 laser on in my office in Massachusetts. It took me a few weeks to get the courage to try this new laser on one of my newborn patients. When I finally did (not knowing at the time that I would be the first provider to utilize the new LightScalpel on an infant) and of course being super suspicious of false promises from laser salespeople in the past, I had my diode “laser” as a backup, in case if this CO2 laser turned out to be another false sales pitch and would not work as promised. Well, it worked as promised and better than I expected or even hoped for. The rest is history. I had to have a CO2 laser. My staff thought I was nuts as I was about to spend more money on another laser. I did not blame them. However, once they saw how exacting and quick the procedures were, even they were convinced. Peter then encouraged me to consider learning more specific and science-based laser information. I spent a long and intense year of studying very exact physics, tissue interactions, and wound healing. The education proved priceless to me and I used this knowledge to improve my own infant frenum class, and now I am a proud member of the American Laser Study Club (ALSC) which provides top-notch medical laser education for dentists, physicians and veterinarians. I am very happy to be on the faculty at the ALSC where we teach many exciting pediatric dental laser courses across the USA, Canada, and Australia.

Obviously, I would not be here today without Dr. Kumar Patel and his discovery of the CO2 laser in the 1960s. The honor of being the Kumar Pater Laser Surgery Prize recipient would not be possible for me without many friends I have been honored to meet and to learn from. 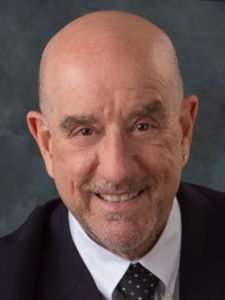 Dr. Kaplan earned his dental degree at Tufts University School of Dental Medicine in 1975. While attending dental school, he became involved with pediatric dentistry and was captivated by the comprehensive nature of the specialty and the ability to treat the youngest of patients and direct them to better oral and physical health.

Upon graduating from Tufts he was accepted into a pediatric dental residency program at Montefiore Hospital and Medical Center in New York where he received his certification as a pediatric dentist.

Following the residency, he opened his pediatric dental practice in Stoughton, Massachusetts. In 2003, Dr. Kaplan became an early adopter of the soft and hard tissue dental lasers. He has been a volunteer laser instructor at Tufts Dental School in the post-graduate pediatric dental department. During 2015-2017 he developed the first in the country “Pediatric Laser Frenectomy” training class through the continuing education departments at Tufts University and Boston University. Dr. Kaplan continues to teach his program now through the American Laser Study Club. His courses were attended by thousands of dentists and physicians from around the globe.