2020 Kumar Patel Prize Recipient for his outstanding contributions to veterinary dermatological laser surgery education, and for the development of the CO2 laser surgical treatment of canine pododermatitis

I would first like to recognize everyone who has embraced the CO2 laser technology and used it to benefit both human and animal patients. I want to especially thank Dr. Kumar Patel to whom we owe so much. It was such a pleasure to meet him a few years ago and to hear his story about his discovery of how to make the CO2 laser efficient. It has been a great experience meeting so many laser clinicians from all over the world joining the ALSC in the advancement of veterinary CO2 laser surgery. I am excited to see what all of this will bring in the future for everyone in all of the medical fields. I applaud especially Dr. Peter Vitruk for his vision to found the American Laser Study Club and tremendous dedication to laser surgery science and education.

I was first introduced to this CO2 laser as a resident in dermatology at the University of Pennsylvania. We attended the American Academy of Dermatology meeting, the main meeting of all the human dermatologists in the US. A little company from Bothell, WA, called Luxar, had this little 10-watt laser on display. I talked to the representative for quite a while. This conversation and laser demonstrations sparked in me a strong interest in technology and my quest to understand CO2 laser better began. This was in 1989 – the term “laser” was not even in the veterinary dermatology textbooks. Really no one was using this in our field and I was frequently discouraged by the older leaders in dermatology who would say laser technology has no use in dermatology or that it is too expensive.

Dr. Duclos demonstrated how he treats pododermatitis at the Penn Vet 2015 Meeting and Wet Lab

After finishing my residency I moved back to Washington State and started my own veterinary dermatology practice but always remembered seeing that CO2 laser. One day in 1991 I stopped by the Luxar laser company, which was located only 15 minutes away from my home, and they welcomed me in, gave me a tour of their facility and let me play with the laser on their testing lab bench space. From there I took the plunge and purchased a little 10 W CO2 laser – my goal was to find things that you could not treat unless you had this device.

At the time there were no available classes on how to use the laser. There was a surgeon at the University of Oklahoma who encouraged me, in a phone conversation, to just try it out. In typical southern jargon, he told me that the way to learn is to “learn and burn”! I think one has to have a certain personality trait to take up this kind of adventure. One needs to not be afraid to try new things. One also has to not be afraid of surgery. I happen to be one of those, I am a self-learner and this served me well in my exploration of things to use the laser on. It was the standard attitude of “no guts no glory” that helped me to plunge ahead.

I am also a photographer, so I accumulated a lot of photographs of what I had used the laser on and I was asked many times to host breakfast roundtables at our annual Veterinary Dermatology meetings. It was from one of these roundtables that one of the attendees happened to be in charge of putting together a chapter in Veterinary Clinics of North America and I was asked to write this chapter. This was published in 2006 and in this, I presented selected dermatologic conditions in which the CO2 laser was either a better or the only tool for treatment. After this more veterinary dermatologists started adopting the CO2 laser and the veterinary dermatology community became awakened to the applications and benefits of this amazing technology. By 2013 the veterinary dermatology textbook, Muller and Kirk’s Small Animal Dermatology, already had the term “laser” in its index as well as full 3-page coverage with pictures of the CO2 laser applications in veterinary dermatology. Another helpful factor at this time was the adoption of this laser by others in veterinary medicine: we started to see some surgeons who had been trained on the use of the CO2 laser in their residency. Additionally, while I was doing my thing over in my dermatology practice, many general practitioners, such as Drs. Godbold, Berger, Schultz, and Winkler, just to name a few, jumped into the fold and helped to spread the word.

Once we had the CO2 laser in our practice, it became evident that whenever surgery was needed, we used the laser. I found this out one day when I needed a scalpel for something and no one knew where we kept the scalpel blades. We just did not need the scalpel anymore.

In my search for laser applications in dermatology, I found many uses. For the two of them, I was the only one who discovered the procedures. One is the ablation of Bowenoid-in-situ carcinoma in cats and the second one is the interdigital follicular cysts in dogs. Almost everyone who used the CO2 laser recognized right away that eyelid, nasal and pinnal lesions were perfect for the laser, as is the removal of the numerous nodular sebaceous gland tumors, viral papillomas, gingival hyperplasia and squamous cell carcinomas. It seems like everyone who used the CO2 laser found these right away. But no one recognized the Bowenoid lesions. I have published numerous papers on using the CO2 laser to treat Bowenoid lesions in the cat and I always include such cases in my lectures. Surprisingly, even with all of this and the passage of 30 years I still see cats presented to my clinic who are being treated with Aldera, which is ineffective, irritating to the cat, and difficult for the cat owner to apply. All of this happens because of advice the pet owner’s veterinarian got from VIN (Veterinary Information Network) or another dermatologist. I think there are still a lot of doctors who resist adopting the CO2 laser as a treatment alternative.

The other condition that I was instrumental in discovering is the interdigital follicular cysts in dogs. I can say without reservation that without the laser I would never have discovered the interdigital cysts as the cause of these recurrent draining lesions. We were all trained in our residencies that the fistulous tracts which occur on the paws of some dogs are all due to infection and long-term antibiotics are needed. Being a dutiful resident, I believed all of the experts who had gone before me. However, once in practice, I discovered that the affected dogs would partially clear with an antibiotic, some seemed to be clear but they would flare up as soon as antibiotics were discontinued and some would flare up even while on antibiotics. I had read articles in human journals that claimed one can use the CO2 laser to sterilize deep draining infections. So I took the plunge and decided to use the CO2 laser in an attempt to sterilize the wounds. The first dog that I treated had draining tracts on both front paws. So we decided to surgically ablate the abnormal tissue on one of the paws. I was fairly aggressive and then had to deal with the client wondering when the dog’s paw would be healed. We kept changing the bandages and after 3 or 4 weeks the paw healed. I was not convinced that I had helped this dog and was not planning to do this ever again. About a year later the referring vet and the dog owner were begging me to do whatever I had done on this paw to the other paw because for the first time ever the paw that we treated with laser ablation was completely normal with no recurrent lesions. So I then started to do this surgery on other dogs. With the very next dog that presented to me, I spent some time trying to see why we had to go so deep on these surgeries. I looked at the bottom of the paws closely and noticed that the ventral part of all of the paws on the opposite side of the draining lesions there was alopecia, comedones and thickened skin. It was in this alopecic thickened skin where I found the follicular cysts and from then on, I approached all of these paw surgeries from the ventral side and very rarely did we have to go up through the top side. I collected about 30 cases over an 8-year period and published my findings. We found that the cause of these lesions was numerous follicular cysts that were filling up with keratin and sebaceous material until they ruptured thus inciting a foreign body reaction that migrated to the top of the paw. This was a completely new finding, in fact, our textbooks and all training specifically taught that in no case are these lesions cysts. The problem I still face is that it is not possible to simply instruct people how to do this surgery over the phone or even in a journal article – it needs to be taught on the live animal. I have had the privilege of teaching many dermatologists and surgeons to perform this procedure. So I expect in time they will teach others and this procedure will become well-known and common.

I am very much honored to receive this award. I know there are many other clinicians who deserve this award more than I do. I feel that, as Dr. Godbold said last year, this is all due to so many others’ advice, encouragement, and support. We all benefit a lot from each other. I always learn so many things from interacting with all the participants at the ALSC meetings. This is truly a great venue for everyone interested in laser surgery. 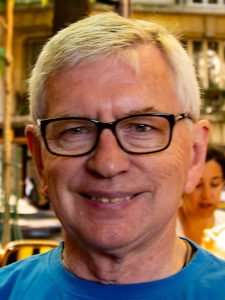 Dr. Duclos is also known for his discovery of interdigital follicular cysts as one of the causes of pododermatitis in dogs. He developed a special procedure using the CO2 laser, which can cure the cause of this condition in affected dogs. He has published several papers and given many veterinarians hands-on training in surgical laser techniques used in the treatment of canine pododermatitis.