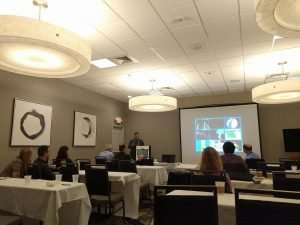 Dr. Winkler presenting at the 2019 Symposium

I am deeply honored to be a recipient of the Kumar Patel Prize. I wish to thank Peter Vitruk and the ALSC for its continued work towards the advancement of education in laser medicine and surgery, of which I am proud and privileged to be a part. Laser Surgery in Veterinary Medicine was a collaborative effort from the beginning, and could never have become what it is without the extraordinary contributions of its authors, each of which deserves high praise. I would like to take this opportunity to thank them once again for all of their time, effort, and cooperation. and to thank my family and especially my wife Nicole for the extraordinary patience and support I have received in all my endeavors.

One of my favorite shows to watch when I was growing up was Star Trek. But my favorite character remains not the indefatigable Captain Kirk or the logical Mr. Spock. It is Dr. McCoy, played by DeForest Kelley, who once said he considered doctors of the future to be teachers, teaching their patients how to improve and maintain their health. At times an irascible curmudgeon, Leonard McCoy was also compassionate and humanistic, as driven towards research and discovery as he was determined to tirelessly help those in need around him. In short, he displayed many of the qualities I valued and wished to emulate as a doctor. He was also quite possibly the first person ever to be seen by the general public to use surgical lasers. It’s one of the many inside jokes of the series that his surgical laser instruments are actually fancy salt and pepper shakers, but they still looked really neat. I’ve always loved gadgets, having been an electronics nerd in high school, but when I went to veterinary school, I never thought I would get to do anything as cool as operating with something like them.

In 2010 a vendor stopped by our practice to speak with me about CO2 surgical lasers, and I gave it a go. The first one had an articulated arm, and though it was heavy and clumsy I loved the benefits and results it produced, and it rekindled my imagination for blending advanced instruments with medicine and surgery. I made an earnest effort to use it in every procedure I performed. We added a laser therapy device to the practice soon after, and I picked up Noel Berger’s text and read it cover to cover. Then I attended John C. Godbold Jr.’s course and wet lab in laser surgery. I enjoyed it so much I ended up taking it twice, wishing there were more like it. I remember him asking me why I came back again, and I just said it was what I wanted to do. Soon after, we hired a new technician who had never really participated much in an operating room before. As a result, she began her surgical experience with laser surgery and all of its hemostatic benefits. When she elected to change venues to a specialty practice, she remarked to us how…how messy…surgery was without the laser, and how she wished it was more widely used in veterinary practice. Her words gelled how I felt; I also wished I could help veterinarians realize and embrace this amazing technology. I had worked in emergency for years before entering private practice and understood there are procedures such as emergency tracheotomy for which one would likely not reach for a laser. But how wonderful it would be for everyone to have an experience such as hers and see the benefits of having and using a laser from the outset. 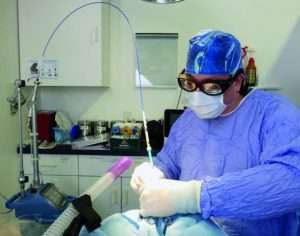 After a few years and many varied soft tissue procedures with the CO2 laser, I was still hungry for more information and experience. Internet searching led me to the American Board of Laser Surgery, and I was surprised at how few veterinarians had taken the course. I had enjoyed physics at university and kind of missed it in veterinary school, so it was a pleasure to study applications in physics to surgery and the interaction of light with living tissue. I find this interdisciplinary blend as fascinating as it is absolutely essential to understanding and achieving the best and safest results with laser instruments.

It felt like almost immediately after obtaining the Board’s certification that I was being asked to write articles and lecture at conferences on laser medicine and surgery. I joined one of John’s wet labs as an assistant instructor and immensely enjoyed teaching others to use of the CO2 laser. I’ve always taken great pleasure in writing and have often been told I’m good at it (though my mother may be biased). To share surgical cases with others, to be a contributor to this slowly but steadily growing body of knowledge, and help others realize what was possible with lasers, was as enjoyable as it was fulfilling. To me there is nothing more satisfying professionally than hearing it was a surgery I performed or something I said or wrote, that has made a difference to someone else. One of the most touching moments of my career was the first time a veterinarian told me it was one of my articles that encouraged him to undertake such procedures himself. It was at an ALSC meeting that he told me this, another prodigious venue where like minds from many different disciplines have come together to share, pool, and disseminate information and continue to improve their own knowledge and experience with each meeting. In just the short time since the last ALSC Breathe and Thrive meeting which highlighted brachycephalic obstructive airway syndrome, I’ve had the opportunity to refine my own procedures from what I learned there in over a dozen more successful airway procedures from a single local French Bulldog organization. Many of those clients have since told us that it was the best thing they’ve ever done for their pet, and that has made all the difference. These are procedures I would certainly never have attempted without a CO2 laser, and now I’m using the word dozen.

I was overwhelmed when I was asked by Wiley if I wanted to create a new textbook on laser surgery, and I was very eager to begin. I remember putting together an outline in just a few days and shooting it over to John for his input. He called me the next day and said, “You’re having fun, aren’t you?” That stopped me for a moment: it wasn’t a question, and I couldn’t disagree. Designing and editing this text and writing book chapters was a new challenge I’d never done before, and was exciting and engaging work. It was also as fun as everything else has been since I first hefted that heavy articulated arm. I am grateful to be able to teach and contribute and discover in this field and continue to learn so much from others. I really do get to use cool gadgets in surgery, which somehow manage to keep everything feeling so new year after year, and geek out about them with other really neat and amazing people. Laser medicine and surgery is indeed the most fun I’ve had in practicing veterinary medicine, and I am humbled to receive this award for something that is such a pleasure. Thank you. 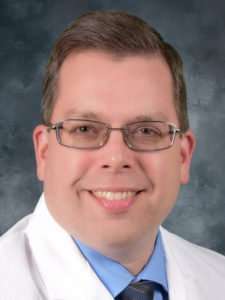 Dr. Winkler received his Bachelor of Science in Zoology from the University of Rhode Island. A lifeguard instructor and certified divemaster, he dove with and studied the behavior of sharks, rays, sea turtles, and marine mammals in the wild and participated in dolphin cognition research at EPCOT Center’s The Living Seas before studying veterinary medicine.

Following graduation from Ross University School of Veterinary Medicine in 2001, Dr. Winkler began his veterinary career on Long Island with 3 years of experience in emergency and critical care medicine and surgery before moving on to small animal private practice, introducing laser surgery in 2010. Developing a special interest in both laser surgery and laser therapy, he began training and education in laser physics, tissue interaction, laser safety, and photobiomodulation, becoming certified in Veterinary Laser Medicine and Surgery by the American Board of Laser Surgery and as a Veterinary Medical Laser Safety Officer by the American Institute of Medical Laser Applications.

Dr. Winkler is the owner and operator of Suffolk Veterinary Group Animal Wellness and Laser Surgery Center, offering the benefits of laser surgery and laser therapy to his own patients and referrals he receives from other veterinarians in New York and New England. A Fellow of both the American Society for Laser Medicine and Surgery and the American Laser Study Club, he has appeared nationally as a laser surgery instructor for conferences such as the NAVC, NYVet, the WVC, the AVMA, and as a presenter on photobiomodulation for the ASLMS, the Great Smokies Veterinary Conference, and the Colonial Veterinary Conference.

Dr. Winkler is the editor and a chapter contributor of the textbook Laser Surgery in Veterinary Medicine, 2019, Wiley, which was recently named “One of the best Veterinary Medicine books of all time” and “One of the best new Veterinary Equine Medicine Books” by BookAuthority. He writes articles on laser medicine and surgery for Veterinary Practice News and has acted as a consultant for laser surgery and laser therapy companies. As a faculty member of the American Laser Study Club and the American Laser Medicine College and Board, Dr. Winkler is currently assisting in the formation of the Board’s examinations.