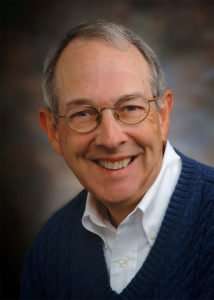 KANSAS CITY, Mo., November 6, 2017 – ​​​​​​​​​​Charles M. Cobb, DDS, MS, PhD, Professor Emeritus at the University of Missouri-Kansas City, has become an Honorary Member of the American Laser Study Club (ALSC). Dr. Cobb’s widely known adherence to the science of periodontology is very much in line with the ALSC’s mission to revive true science- and evidence-based education in laser dentistry and surgery.

Dr. Cobb has authored and presented a number of papers on the use of lasers in periodontics. Among his latest publications is the article “Is There Clinical Benefit From Using a Diode or Nd:YAG Laser in the Treatment of Periodontitis?” (Cobb CM. J Periodontol. 2016 Oct;87(10):1117-31.).

Direct Quote from this Publication:

“Both cognitive dissonance and confirmation bias are concepts that initially appeared in the psychology literature. Simply stated, cognitive dissonance refers to an individual holding conflicting beliefs, whereas confirmation bias is the interpretation of information to confirm one’s beliefs and ignore information that may contradict such beliefs. The biologic sciences have adopted the concepts and now apply them to research evidence that seems in conflict with ‘everyday practice.’ At a very basic level, both concepts refer to a tendency to interpret information in a way that confirms one’s preconceptions while ignoring contradictions presented by the peer-reviewed evidence.

As applied to the issue of lasers and periodontal therapy, cognitive dissonance defines the confusion and conflicting philosophies expressed by ‘thought leaders’ in clinical dentistry when confronted by new information that conflicts with their existing beliefs. Many of the ‘experts‘ on laser periodontal therapy appear to have allowed their subjective selves to become dominant and thereby shape controversy into fact. This does not mean that expert opinions are never reliable. However, it does mean that clinicians should not depend solely on secondary sources for information on which they base treatment decisions. The clinician should also evaluate and make knowledgeable judgments of peer-reviewed research articles. Treatment decisions must be based on good evidence that can withstand hard and incisive questioning. Such evidence is not often obtained from the company sales representative or a clinician consultant representing the laser company.” – Charles M. Cobb, DDS, M.S., Ph.D.

Dr. Charles Cobb graduated from the University of Missouri-Kansas City (UMKC), School of Dentistry in 1964, with a Certificate of Specialty in Periodontics. In 1966 he received a Master of Science degree in Microbiology from UMKC. Following two years of active duty with the U.S. Navy, Dr. Cobb returned to school at Georgetown University, from where he graduated in 1971 with a Ph.D. in Anatomy (emphasis on microanatomy). Following his graduation from Georgetown, he held teaching and research positions at Louisiana State University and the University of Alabama in Birmingham. Dr. Cobb devoted 15 years to full-time private practice in periodontics and 17 years to academia. He is a Diplomate of the American Board of Periodontology and has published over 200 peer-reviewed papers and presented over 200 programs at regional, national and international meetings. Dr. Cobb recently concluded one year as the Interim Director of the Graduate Periodontics Program at UMKC. He served three years on the Board of Trustees of the American Academy of Periodontology and three years as the Academy’s Parliamentarian. In 2012, the American Academy of Periodontology recognized Dr. Cobb as the Outstanding Periodontal Educator. He is retired from the UMKC School of Dentistry as a Professor Emeritus. Dr. Cobb retired from the U. S. Army Reserves with the rank of Colonel and is one of the few Reservists to have received the “A” Specialty Designator from the Office of the U. S. Army Surgeon General and induction into the Order of Military Medical Merit.

About the American Laser Study Club

The American Laser Study Club (ALSC) was created to fill the void in the current Laser Dentistry and Laser Surgery education system, namely the science behind laser-tissue interaction. The “sound scientific basis and proven efficacy in order to ensure public safety” is one of the main eligibility requirements for the American Dental Association’s CERP Recognition Standards and Procedures. Unfortunately, some laser dentistry educational programs and publications misrepresent certain aspects of soft and hard tissue laser science and safety. Such misrepresentations partially originate in the Laser Dentistry Curriculum Guidelines, which date back to the early 1990s, and lack numerous important laser-tissue interaction concepts, such as the Absorption Spectra; Hot Glass Tip; Plasma Plume, etc.